Between battling mosquitoes, we were able to enjoy a game outdoors. 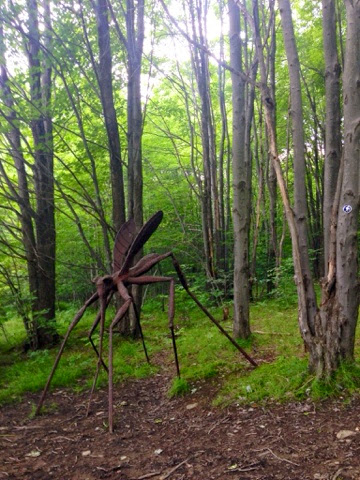 I followed the map Sister Rebecca/Evil Wizard gave me to the mouth of a cave in the hills south and west of Skalafell.  The tunnel within forked, and I chose to pursue the one to the north. Rarely do I choose the South.

As I approached a cavern, my torched flickered [which was supposed to be a terrible clue that something was amiss] I just assumed that a breeze swept through. I am still a newbie and all! Remembering my infravision, I opted to extinguish my torch and peer into the cavern in hopes of not drawing attention to myself.

A large cold glob stood in the center of the room. Lighting my torch I saw a grotesque tentacled monstrosity of a statue. I was frightened! I had hoped to quietly sneak by, but it was not to be - of course the living crystal statue animated and smashed at me with its massive tentacles. UGH!

I blocked and parried blow after blow before finally shattering the statue into hundreds of shards. I found the smashed crystal quite beautiful and stashed some of the shards in my backpack. I took some damage, but not much [we're using Solo Heroes, so damage at most is 2 points per hit, and quite often just 1 pt].

I decided to return to the other fork and explore that direction, but found the path mysteriously blocked by a wall. I couldn't for the life of Fjörgyn figure out how the path became blocked. (It wasn't until after the game when John explained how the flickering of my torch could be related to such magic. I will never shrug off a flickering torch again) A search for secret doors revealed nothing, despite my elven prowess in such matters, so onward I went.

After trying to climb my way around the walls of a room and falling onto a great glowing sigil painted on its floor (which cost a point of INT), I made my way into a chamber wherein a large leather bound book, sealed with a clasp,  rested on a small plain stone dais. BINGO!

Taking no chances with my safety, but risking the book, I knocked it from its resting place. As the book skidded into the rough ground, this transgression triggered the rapid appearance of 3 skeleton warriors bent on making my life pretty miserable in a battle that did not go my way (I came close enough to death that I was fidgeting and getting worried).

Finally, in an act of desperation, bloodied and bruised, I grabbed the spellbook and, like a young Walter Payton (thanks John), blasted through their line and out the door into the hall opposite the way I came in. The skeletons did not pursue. I came to the precipice of a great chasm some 20' wide.

Despair settled in for a moment before the light bulb went off and I noticed hand holds and a small ledge allowing me to cross the chasm ever so carefully.

Ahead, I heard the distinct sound of loud voices and with torch extinguished I spied several humanoid shapes sitting about another cavern.

With surprise on my side, I prepared my Charm Person spell. It was not until I uttered the necessary phrases that the goblins became aware of my presence and by then it was too late - all but one of them failed their save. The sole exception charged into melee (I won the initiative) but was cut down quickly and easily. As for the others, they could not understand why their brutish companion would attack their dear friend, the elf.

So happy were they to see their long lost bestie, they readily gave up information about the tunnel system. Realizing my health had been seriously compromised by the statue and the skeletons, I asked for directions to the closest entrance. As it turned out, the goblins had their own secret way in and out of the cave and happily showed me the way to the surface. Phew.

Sadly, obligations to their Boss prevented them from going with me back to town to continue our joyous gathering.

We ended the game there. Fjörgyn promptly locked up the GM before he could sick any other creatures on her. 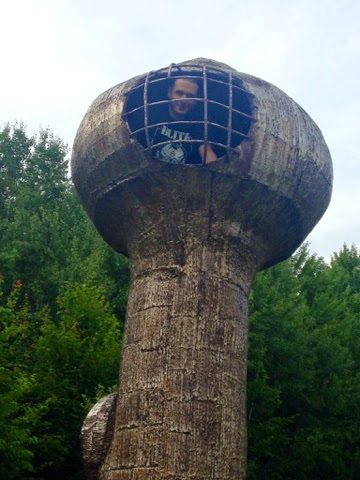